The Parity Pledge asks for a commitment to take action and working to increase awareness of gender parity issues was the area I pledged to take action.

Thinker frog might be thinking about other things besides the need for gender parity in the art world. I don’t really know. The photographs are actually unedited rather than being badly edited and were taken with natural lighting. I haven’t learned how to use my new photo editing software yet. /adjusting the light would have been easy on the software that I had been used to using./ So these photos are poor representations of the collection of posters – I’ll add a few details about the collection and the artists later. (Second post, Third post in the series) 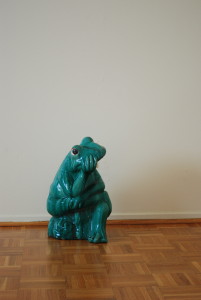 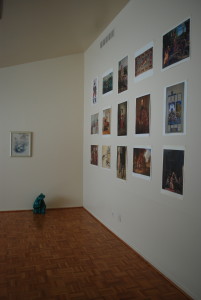 Hanging the collection of posters of art masterpieces from around the world was a self challenge. I had bought the collection used and laid them out on the floor one morning. The arrangement was pleasing somehow and I had an empty wall so — I just hung them up even though I wasn’t sure if I could do it by myself or without a scaffolding. I did have a stepladder though and a tape measure but no other person to help with laying out a measured gridwork over the large area. The room has a cathedral ceiling so the wall has extra space.

With poster putty on the corners laminated posters are fairly easy to stick up anywhere  though and then you can adjust them slightly as needed to straighten the horizon line. I did measure the base of the wall and double check where the center of the room was located. Then I worked from the center row, hanging the lower, middle, upper posters; and then hung the bottom row, middle row, and top row. Thumb tacks at the top corners helped secure them in place after all the tiny adjustments were completed to my satisfaction when viewed when standing on the far side of the room. The poster putty by itself tends to unstick after a day or two — leaving you to rehang and readjust. I learned that lesson earlier though but thankfully with fewer posters involved.

I did it even though I wasn’t sure if I could. 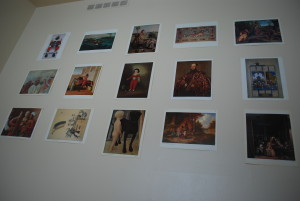 “I’ve often thought there ought to be a manual to hand to little kids, telling them what kind of planet they’re on, why they don’t fall off it, how much time they’ve probably got here, how to avoid poison ivy, and so on. I tried to write one once. It was called Welcome to Earth. But I got stuck on explaining why we don’t fall off the planet. Gravity is just a word. It doesn’t explain anything. If I could get past gravity, I’d tell them how we reproduce, how long we’ve been here, apparently, and a little bit about evolution. I didn’t learn until I was in college about all the other cultures, and I should have learned that in the first grade. A first grader should understand that his or her culture isn’t a rational invention; that there are thousands of other cultures and they all work pretty well; that all cultures function on faith rather than truth; that there are lots of alternatives to our own society. Cultural relativity is defensible and attractive. It’s also a source of hope. It means we don’t have to continue this way if we don’t like it.”
― Kurt Vonnegut

Gender inequality in the art industry reflects similar employment and wage differences that are seen in other fields. Opportunities may not be as prevalent for female artists or female art museum directors according to recent research and surveys:

“Women run just a quarter of US art museums with budgets over $15 million, according to the study “The Gender Gap in Art Museum Directorships,” released in March by the Association of Art Museum Directors and the National Center for Arts Research. Those leaders make just 71 cents for every $1 earned by men, the study says. As for artists represented by galleries in New York and Los Angeles, just 30 percent are women, according to the collective Gallery Tally.” Read more: [https://news.artnet.com/art-world/art-world-bias-by-the-numbers-94829]

Disclaimer: This information is provided for educational purposes within the guidelines of fair use.