Wearing undergarments like bras that fit too tightly or for most of the day and night may increase risk of breast cancer and can increase pain from fibrocystic breast disease. Bra extenders are very inexpensive solutions to tight garment bands and are available in different sizes and colors. Band extenders that add one to three inches can be purchased for a few dollars. The search term ‘bra extenders’ will provide many examples of the product.

Research has not been performed regarding their use against breast cancer but a better fitting bra may reduce pain associated with fibrocystic disease. Women who did not wear bras regularly had half the rate of breast cancer compared to other women in a study published in 1991. The focus of that study had been on a different topic than clothing habits [1]. A 1991-1993 Bra and Breast Cancer Study found a similar correlation [2]. Mainstream sources do not list the amount of time that bras are worn as a cause of cancer [3].  Further research to substantiate or disprove the correlation from the 1991 studies is needed.

However too tight garment bands can be painful and they may reduce detoxification of blood by the lymphatic system. Lymphatic fluid helps remove toxins from the body at the lymph nodes. The lymphatic system has a series of vessels that are similar to arteries and veins. The lymph fluid interacts most directly with blood flow at the lymph nodes. Blood is pumped through the arteries and veins by the power of the heart.  Only the activity of the surrounding muscles moves lymphatic fluid. Regular movement during exercise or an active lifestyle may help health by increasing the removal of toxins at the lymph nodes. White blood cells that can fight infection and cancer are also active at lymph nodes.

The tightness or over-tightness of the band is likely to be the main issue, but how far the underwire extends under the arm could also affect fluid movement. Lymphatic flow moves sideways towards the underarm area more than downward. [4]

Excess heat of the constricted tissue may also be a concern. [5 and 6]

A study and television documentary, “Bras – Bare Facts,” (2000) found not wearing a bra to greatly reduce fibrocystic breast pain on average for a group of 100 women. – partial transcript on a site with a few anatomical pictures: [6] Excerpt from the documentary about fibrocystic pain:

Iodine deficiency has also been associated with fibrocystic breast disease so complete elimination of bras is probably not necessary. [7] Adequate iodine and selenium intake early in life and elimination of excess bromide might help though.

Men may need to check the fit of their clothing for a different reason. Wearing tight jeans for many hours may reduce male fertility. Increased body temperature seems to be the issue rather than reduced lymphatic flow. A laptop used directly on the male lap has also been associated with reduced male fertility. [9] Carrying a cell phone in a pants pocket for hours may also be a concern to fertility due to the radiofrequency electromagnetic waves [8]

This article is based on a shorter comment and reply that was previously posted elsewhere.

Binding of body parts is also likely to cause health problems, reduce lymphatic flow, increase heat and sweat which may promote yeast overgrowth, and possibly restrict motion. If society could just accept people as people instead of focusing so much on appearance and body parts more of us might create wonders with all the energy not being wasted on trying to fit in or on feeling a need to fit gender norms.

Women and girls are hypersexualized while boys and men tend to be portrayed as people with varied characteristics. Advertising showing girls and women for products may be very sexualized while the same product for men or boys may be presented as normal clothing, a couple examples: https://twitter.com/PepiteSexiste/status/1062805463115407360

Why are girls shown to wear very little clothing in cold weather and risk getting overchilled? It sets a role model for other girls to also ignore health over societal expectations.

Love the body you’re in and the mind – health is something that difficult to recover if harmed.

Self harm can occur with physical and mental problems, therapy and health care both may help.  See this post for more about a physical problem associated with self harm urges, and a link to a book written for counselors from which I adapted the list below: 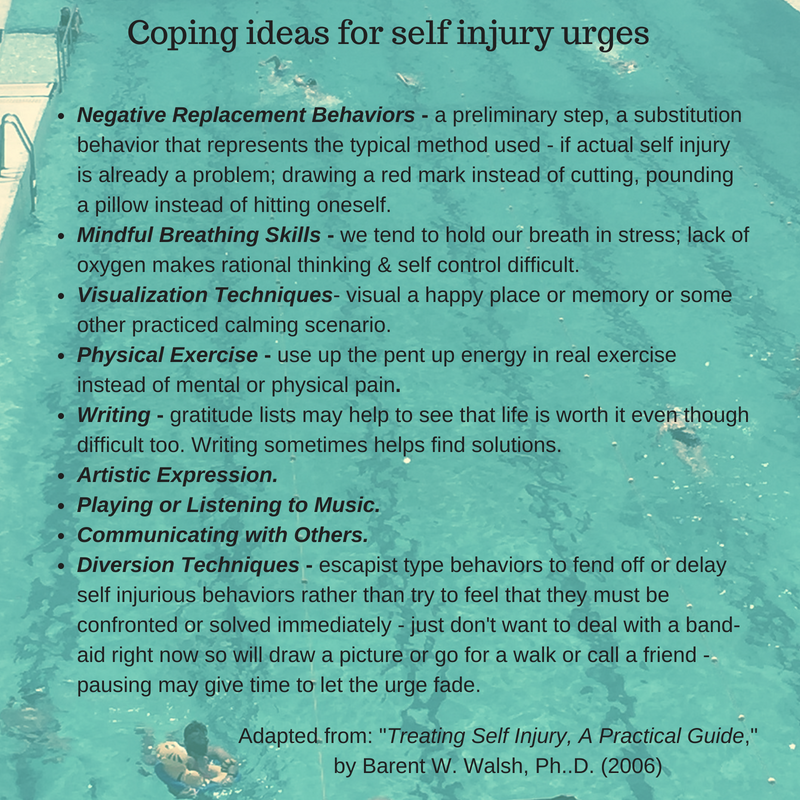