My new puppy had Parvovirus and was wasting away within 24 hours of the acute diarrhea and vomiting phase of the canine sickness. She became ill about a week after we first got her. Parvovirus kills 80-90 percent of dogs if left untreated due to the severe dehydration caused by the GI symptoms. The dogs who are ill with Parvo virus are left with no appetite and are at risk of other infections. Severe diarrhea leaves the intestinal walls raw and open. 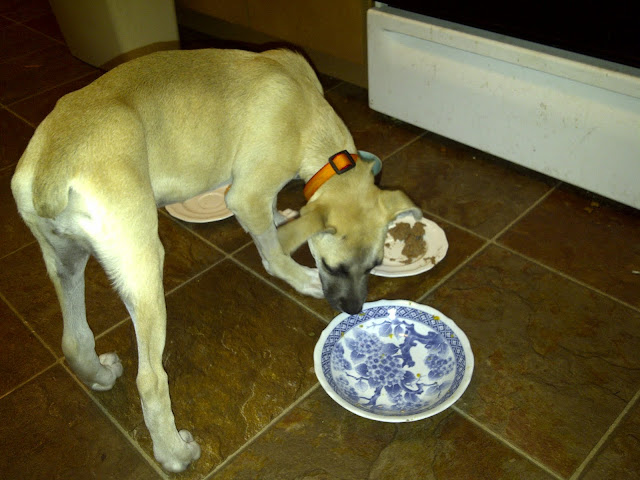 The puppy is a short hair,  honey colored German Shepard/Boxer mix. I didn’t know that when I first saw her, I simply thanked the universe for sending a Siamese puppy (a Siamese cat passed away this summer). The puppy’s snout is seal point brown and her eyes have plenty of natural eyeliner (Roxanne was briefly her name before Ginger beat out the other contenders, Curcumin, Turmeric, and whistle-whistle-click-click).

She spent a couple nights at the vet with an IV. She was so dehydrated she was staggering  after only one day of diarrhea symptoms and one episode of vomiting. At the time I thought I had fed her too much/too much variety/too something. We didn’t know about puppy sicknesses but I knew about acute dehydration symptoms and she was going to die without an IV because I couldn’t even get her to lick water off my fingers. 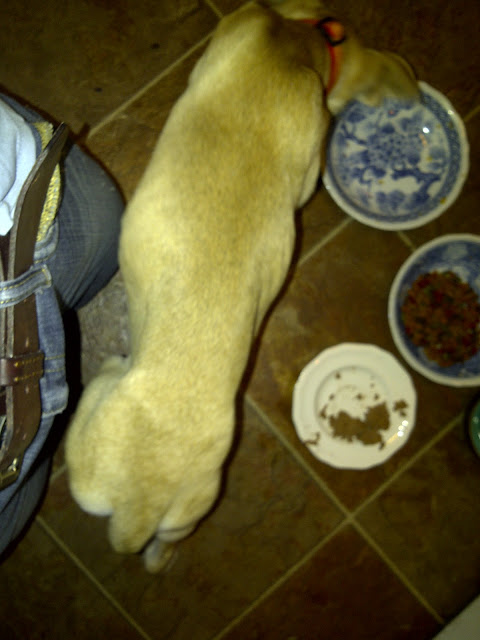 At the vet she got IVs for two days and was given a prophylactic shot of some antibiotic. She was also given an anti-emitic drug while there and was sent home with four additional days of the anti motion sickness / anti-emetic drug, Cereniea (maropitant citrate, one 16 mg tablet/day). The box says for use in dogs 16 weeks and older and our puppy is 13 weeks old – it did seem to help her tiny appetite to return to ravenous toddler dog appetite. She weighs about 20 pounds healthy.

I was very worried about her the first couple days back from the vet. I had already been feeding her extra because she was thin and the “runt” – smallest – of the litter. She probably was already sick as well. She chose my husband when he stopped by a box of puppies in a parking lot so she may not have gotten ideal care at her birth home.

She had been eating a some of her puppy crunchy food in addition to occasional supplement foods. I mashed egg or burger with a little ginger powder and salt . I also added hemp oil, about 1/4 -1/2 tsp per meal in the pre-sickness days. She was fattening up, was getting less timid and anxious, and she was losing her runty look in the few days we had her before she got really sick. If too much is coming out and nothing is going in and the individual is a fragile young, old, or sickly individual – than death is close behind without IV and other acute medical intervention.

However without adequate feeding every two hours she wouldn’t have survived the recovery period. The frequent care and hands on care and feeding during the first two nights was important. The first night she would only sip water and lick a few teaspoons of the canned dog food. But then two tablespoons, then 1/2 cup, the 2 cups of varied foods made it past her queasy nose.

After she returned from the vet her hair was falling out and she was thinner than ever (and had that near death smell). I was scared but kept her company that first night and offered little sips of electrolyte water (Smart Water and the dish of a few tablespoons of canned digestive balance dog food that the vet had provided ( I did mix in ginger powder but I stopped using the hemp oil – it has an obvious smell and she was a very picky eater – eggs also had too much smell and she no longer ate them after the sickness with Parvo virus.

The wet food was to be gradually mixed with puppy crunchies by teaspoonful portions as her appetite returned. Her appetite got a lot better with hamburger, chicken breast or pot roast then it ever did for the canned digestive balance food or the puppy crunchies. Initially I was finely mincing a few tablespoons of chicken with broth and a little ginger powder and sea salt. She would eat a few bites every hour or two for the first day. 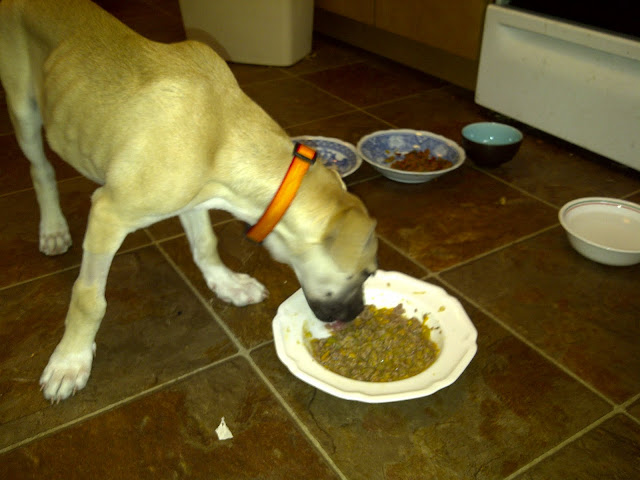 By the end of that first day the pound of chicken was gone and by the end of the second day the three pound pot roast and sweet potatoes was gone. The servings started out in 1/2 cups portions but became 2 cup portions every few hours  (all with the smidge of ginger powder and sea salt and whatever herbs I had added to the cooking – I don’t cook with salt or pepper it can be added more accurately to the individuals taste/biologic need and craving at the table). *Addition Aug. 9, 2017 – ginger powder can have anti-ulcer effects but may worsen a condition of Irritable Bowel Syndrome. One or a few of it’s active phytochemicals seem to activate TRP channels in the GI tract and can increase diarrhea. [1] 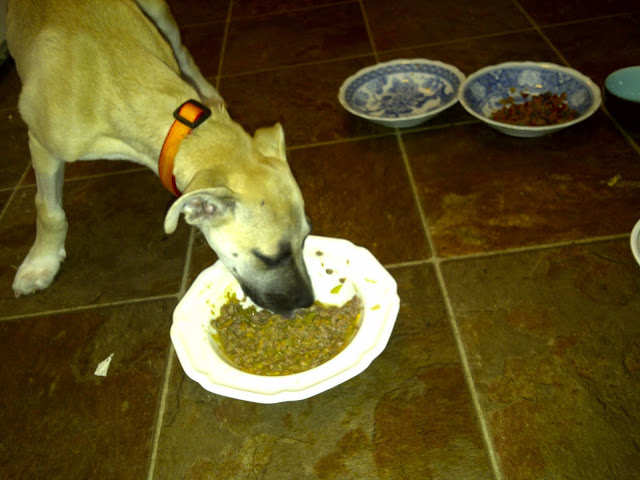 I am not a dog person but my grandma’s farm dogs all got their share of the days cooking and table scraps. They also got dog kibble but they seemed to prefer the mixed meat, gravy, bread and vegetable scraps that were chopped up at the end of the day by my grandmother. If you read a can of dog food, the recognizable ingredients tend to be turkey, rice, carrots etc. We have found some mosist dog food that she is eating in addition to some of our meat and vegetables (and ginger powder) now and I haven’t cooked her another pot roast (yet).

The moral of this story is – ginger powder added to Ginger’s food may have helped turn this almost dead Parvo pup back into her normal pathetically sad faced (but well-fed) Starvo-pup routine of begging for third and fourth helpings. Ginger would help protect and heal the intestinal lining and fight infection and parasites (worms).

The home cooked meat meals helped to. If I had kept offering the digestive balance food alone I don’t think she ever would have accepted more than the few teaspoons to tablespoons – I never even opened the second can of that stuff. She also enjoyed pork cutlet (it was cheap).

Today I was ready for a break from her too much energy but I realized that I should be grateful. Only one week ago her hair was falling out, she smelled of death and was skeleton thin. We can still count her ribs but they have a little rounding and her tubby belly is proof that the begging act is working. 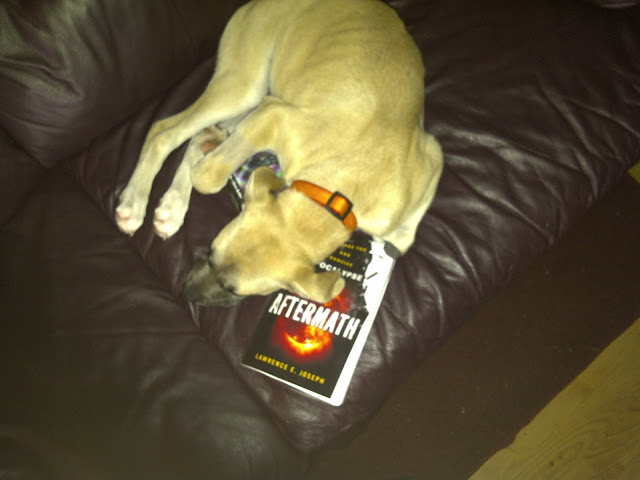