Really good flavor in today’s batch of soup – notes for the virtual record:

I didn’t measure anything in measuring cups or spoons, so roughly, to one basic batch of soup which includes onion, garlic, celery, carrot, sweet potato and today, pinto beans green beans – written in the order that they are added to the cooking time process:

All of the ingredients would likely have health benefits and contain beneficial phytonutrients and other vitamins and minerals.

I’ve mentioned a few in the past but haven’t mentioned Tamarind Powder/fruit paste. It has been shown to have medicinal benefits and adds a slightly sweet tartness to foods. It also contains some beneficial fibers which is likely why it tends to clump when I add it directly to a batch of hot soup. It can be purchased as a paste or a dry powder. If purchased in a more whole form the small seeds need to be removed before use. It is a common ingredient in India and can be found in Indian food grocery stores. The paste dissolves better in the hot liquid or sometimes is used to make a sweetened beverage. While the powder may be easier to dissolve in a small bowl where you can continue stir more vigorously until no lumps remain. Tamarind Seed Powder: (1)

Polyphenols in Tamarind Seed Powder have been found beneficial for promoting Nrf2 and reducing oxidative stress. The seeds are edible and are dried and used similarly to lentils/beans. (2) The powder I used is called Tamarind Powder and may just contain the dried fruit. The fruit pulp, leftover from processing, was analyzed and found to contain yellow flavonoids and  polyphenols, (3), both of which are in a group of phytonutrients that may promote our own production of Nrf2 – which can help a variety of chronic health conditions. See this previous post for more information about the potential health benefits and phytonutrients that may promote Nrf2: Nrf2 helps activate beneficial genes that are protective against inflammatory conditions.

or at the end of this webpage: G8: Cookies and Bean Soup.

Black eyed peas are a traditional good luck food for New Year’s Day that dates back to the Civil War. Soldiers would take all the food that was available but leave the black eyed peas because they were considered a food that was fed to farm animals. The slaves that were still on plantations were glad to have the high protein food and the flavorful peas became associated with good luck – lucky to have food. They were traditionally served with collard greens or some other greens, corn bread and pork. The pan drippings added flavor for the greens and the corn bread helped soak up any extra liquid. The gold color of the corn bread was associated with gold and good fortune – money due in the new year. Read more: tripsavvy.com.

To make plain black eyed peas or other larger beans such as pinto or kidney beans: 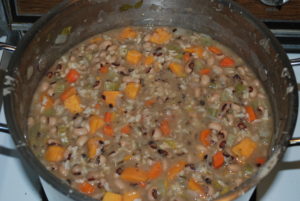 Since I am no longer lucky enough to be able to eat corn bread due to autoimmune symptoms I prepared two cups of rice in a separate pan and combined it with the soup when the vegetables and beans were done.

A large batch of soup ideally should be chilled in small glass or heat resistant containers or stir the soup in a large container or a couple larger containers in the refrigerator occasionally until the soup is chilled before adding to a plastic container. 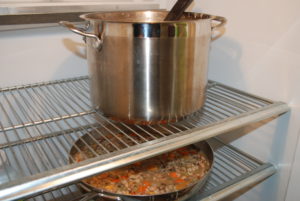 I add salt at the table as we only taste salt that is on the surface of the food and unlike in baked goods there is no chemical reaction that requires stabilization by salt. If you forget the salt in a baked good it will likely have a crumblier texture. Baked goods are chemically recombining the ingredients into a new molecular form. Soup is more of a watery base with stuff floating in it.

Speaking of baked goods – a cookie modification to the eggless, gluten free recipe on my newer website (Chocolate Chip Cookie). These cookies are dairy free as I use baking cocoa and no chocolate chips. They are slightly less sweet and would have an increased amount of protein due to the substitution of almond meal for the buckwheat flour in the other recipe:

Step 1: — Combine the flax meal and boiling water and stir together for a few minutes until the mixture is thickened and looks a little like a watery porridge. Then add the melted coconut oil, brown sugar, vanilla and apple cider vinegar, stir and set aside until later.

If desired these cookies could be made as double chocolate cookies by adding the chocolate chips at this stage as was included in the original recipe. I didn’t have any on hand.

Step 5: — Preheat oven to 350’F., and form cookies with a scoop or with a pair of metal spoons as the batter is sticky and might even work in a cookie press if there weren’t chocolate chips. Form approximately one inch size balls of dough. Place about 24 on a pre-oiled or nonstick cookie sheet.

Step 6: — Bake in the center of the oven and/or rotate the top and bottom pans after 15 minutes of baking. Bake for 20-25 minutes until slightly golden brown.

Step 7: — Allow to cool slightly before eating and store in an airtight container once they are cool enough to no longer be emitting steam. The cookies keep for about a week or until they are all eaten, whichever happens first. They can also stored in the freezer once they are baked or as a cookie dough to be formed into cookies and baked at a later time for a treat fresh out of the oven with less work. 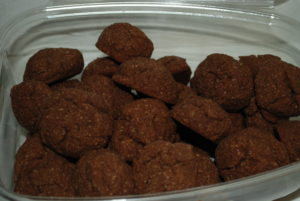