Folate (L-methylfolate or vitamin B9) and Folic Acid: 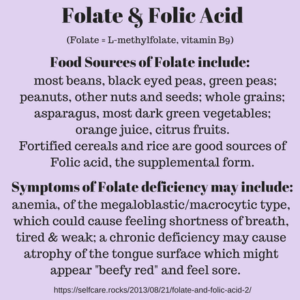 Food Sources of Folate, the bioactive natural form, include:

Folate is the natural form; Folic Acid is in supplements & fortified foods.

Folate is the form of the vitamin found in food and is more bioactive.  Folic acid is the form that is commonly available as a supplement and in fortified foods, however it is less bioactive, less able to function until methyl groups are added which requires adequate supplies of vitamin B12. A genetic difference may exist in some individuals that prevent the body from being able to convert the inactive folic acid form into folate, the methylated bioactive form of the vitamin. [More about methylation.]

Symptoms of Folate deficiency include:

Other References used for the food sources of Folate and Folic Acid:

Research in the field of epigenetics by a team led by Dr. Randy Jirtle, an oncologist at Duke University, found physical changes in the experimental groups to be preventable if the experimental BPA diet was also supplemented with the B vitamins, folic acid and B12.
Mice who were fed BPA prenatally had significantly more babies develop a characteristic hair color and they were at increased risk for gaining excess weight compared to the control group of prenatal mice that did not receive any BPA. However when the mice were fed a diet with extra B vitamins prenatally along with the BPA there were fewer babies with the change in hair color and associated health risks. The addition of the soy bean phytochemical, genistein, also helped reduce the number of baby mice who developed the change in hair color pigmentation. [1,2]
Bisphenyl A acts similarly to the hormone estrogen. Genistein is a phytoestrogen that may help block harmful effects of estrogen mimetics. The B vitamins used in the study were chosen because they can donate a methyl group which is necessary for allowing genes to remain unactivated, to stay in an off position. A gene that has few methyl groups may be more easily activated than normally.

Two other methyl donors, choline and betaine, were used in addition to the folic acid and vitamin B12. Choline is also a water soluble essential nutrient that is frequently grouped with the rest of the B vitamins. Choline is found throughout the body but is particularly important within the brain. Betaine is a metabolite of choline. Spinach and beets are rich in betaine. Good sources of choline include egg yolks, soy beans, beef, poultry, seafood, green leafy vegetables and cauliflower. [3]

A prenatal diet providing a low intake of the methyl donors folate and B12 has been associated with cardiomyopathy in the infants. [5] Infants born to mothers with a low intake of the methyl donors folate, B12 and choline were also more at risk for cardiomyopathy later in life. [6] Not taking prenatal vitamins during the three months prior to conceiving or during the first month of pregnancy has been associated with an increased risk for autism in the infants especially for women who have a genetic variation in their methylation metabolism, (MTHFR 677 TT, CBSrs234715 GT + TT). [9] People with problems in the methylation pathways may need to take a methylated form of B12 and folate rather than the more commonly available form of folic acid. [10]

A link between BPA intake and an increased risk for heart disease has been discovered. [7] The physiologic reason is not known. Tips from the article for people hoping to reduce exposure to BPA include:

It has not been conclusively proven that a diet with adequate supplies of methyl donors protects DNA from changes that may be caused by BPA but a diet providing plenty of B vitamins is also unlikely to cause harm. B vitamins are water soluble and quite safe except in such large doses that would be difficult to obtain from food sources alone. The B vitamins work together in metabolic pathways that are essential for burning and using energy sources. The B vitamins might be described as being similar to matchsticks for accessing  the stored energy and so they are important for daily energy levels and for a good mood.
~ ~ ~ ~ ~ ~ ~ ~

Other references regarding B vitamins:

/Disclosure: This information is provided for educational purposes and is not intended to provide individual health care. Please see a health professional for individualized health care./