Exogenous lipoid pneumonia refers to a fairly rare type of lung illness that is caused by an external/exogenous source of lipids/lipoid. The condition was first associated with the use of mineral oil that was used in nasl medications prescribed for tuberculosis, common in the 1940s and ’50s. It has more recently been associated with the use of Vaseline (TM) type petroleum jelly, which has been used for making the placement of breathing tubes easier and more comfortable for patients. (1)

The mineral oil based Vaseline (TM) is used to coat the outside of the tube before inserting it in someones nasal passage. Unfortunately with long term use the presence of mineral oil in the nose may lead to aspiration, breathing in too much of the mineral oil. Within the lungs the extra oil collects and may cause inflammation of lung cells. Granulomas, groups of inflamed cells, may form which can eventually also lead to fibrotic scar tissue formation and long term loss of lung function. (1, 2)

The rare type of pneumonia, exogenous lipoid pneumonia, has also been reported in one case of excess intake of coconut oil by an infant (5) and two cases of sesame oil pulling. (6) Coconut oil or sesame oil pulling refers to a process used for cleaning the teeth and gums. About a half teaspoon of the oils, which both have anti-inflammatory benefits for general use, is swished throughout the mouth and between the teeth for several minutes to even 20 minutes. That amount of swishing can become tiring and aspiration might become a risk. The case involving an infant involved a sibling giving the baby a bottle with coconut oil by accident (coconut oil is used for hair care, may help prevent split ends). Infants have an increased risk of aspiration as the muscles controlling the closure of the lung passage during swallowing of food are less well developed than in older children or adults. (5)

The excess collection of fats within lung cells has also been observed in the lung disease called silicosis seen mainly in industrial workers. Silica dust is breathed in and the lung cells accumulate both silica dust and the condition can be more severe when there is also absorption of excess lipids from the blood from oxidized Low Density Lipoproteins (ox-LDL). (3, 4)

Returning to the topic of vaping and vape mixtures discussed in the last post – aspiration, drawing liquid or oily substances deeply into the lungs, is a direct result of vaping a mixture that contains oils. Excessive amounts can collect within lung tissue too easily because it is difficult to cough out excess mucous or fluid from deep within the lungs. Chronic Obstructive Pulmonary Disease (COPD) and pneumonia are both conditions that involve too much fluid within the lungs. It can be difficult to draw a deep breath because there isn’t enough air space left. The person is likely to weaken very easily and the condition may be quite painful from the pressure of the excess fluid accumulation. COPD may even be likened to a feeling of drowning – except that it is happening all day, every day.

The take home point of this post may be to use caution with vaping as excessive use may be increasing risk of lung damage, and as a bonus, be aware that regular use of coconut oil or sesame oil pulling for teeth and gum health may have a risk of lung symptoms if aspirated. In other words, if lung symptoms are a problem let your doctor know if you vape or use coconut or sesame oil pulling for the purpose of teeth cleaning.

Duty to warn is phrase used in medical care regarding an ethical duty to warn patients or research participants or anyone at risk of the potential harm. My own health and my experience helping others has made me appreciate wellness and sharing what has helped or what can be harmful are things I feel ethically it is my duty to warn or inform anyone who might be interested. We are one – your pain is my pain and the Earth needs more health. It is hurting too.

Empathy – feeling emotionally connected can also feel painful, a short article discusses the idea of the pain that may occur with feeling compassion for other’s suffering:

The Agony of Being Connected to Everything in the Universe, (andrewboyd.com)

The words sympathy, empathy and compassion are used somewhat interchangeably however they can refer to slightly different things. In medical settings the care of patients can be affected positively or negatively by how the caregiver provides help. Research with patients receiving cancer treatment found that patients felt that empathy and compassion were beneficial while sympathy was perceived more negatively. Compassion was felt to be most beneficial by the patients. What is the difference? Sympathy seems to be regarded as pity-based remarks or attitude about the chronic illness that was offered without having been asked, with less of a feeling of being understood. Empathy may be closer to feeling emotionally understood and compassion included feelings that the caregiver was acting with love and kindness out of a altruistic – giving mindset. (3) The risks of rudeness in a medical setting and possible value of kindness is discussed in a review of a research study on rudeness in a neonatal clinic setting: A Message to you Rudy, about Rudeness, SGEM#227.

Feeling like there is a physical problem and being told that it must be hypochondria or mental illness is not as helpful as being told that a reason for the symptoms are unknown at this time. Chronic itch, chronic pain and other vague symptoms of inflammation may be labeled as psychosomatic instead of unknown cause. Overactive TRP channels can be involved in chronic itch and chronic pain and the variety of possible substances and other reasons for a flair up in symptoms can make it very difficult to notice the pattern. I would rather be told we don’t know what is causing your symptoms than to be told to see a talk therapist or to be prescribed medications for mental illness that may cause additional symptoms due to side effects. The following chart is something I created after noticing a pattern, a very complex pattern, in my own symptoms and researching what the connection might be —- TRP channels. Not all substances or factors would cause symptoms for all of the conditions or for all people with a certain type of condition, however they may in larger amounts, or they may when the symptomatic condition is in a more severe state of inflammation. In reading about patients with some types of chronic itch symptoms I could feel their itchiness and mental hurt when treated as just difficult patients with anxiety problems – anxiety other extreme itchiness perhaps.

More about chronic itch and inflammatory stress conditions is available within a longer page/chapter I wrote about G3:Relaxation & Stress: G3.5: Negative stress chemicals may cause symptoms like itching, migraines, pain or IBS. (effectivecare.info) Preeclampsia is a prenatal condition that can become life threatening for the woman and expected infant and it affects a significant percentage of pregnancies – more information about TRP channels and a physical position that might help reduce internal pressure on the channels is available in the section on G5: Preeclampsia & TRP Channels. It is a yoga style position that was recommended to reduce risk of a breech birth during my own pregnancies and I found it relaxing. (effectivecare.info) I feel a duty to warn – a duty to inform other expectant mothers about a simple strategy that might protect their infant from a potentially life-threatening condition. 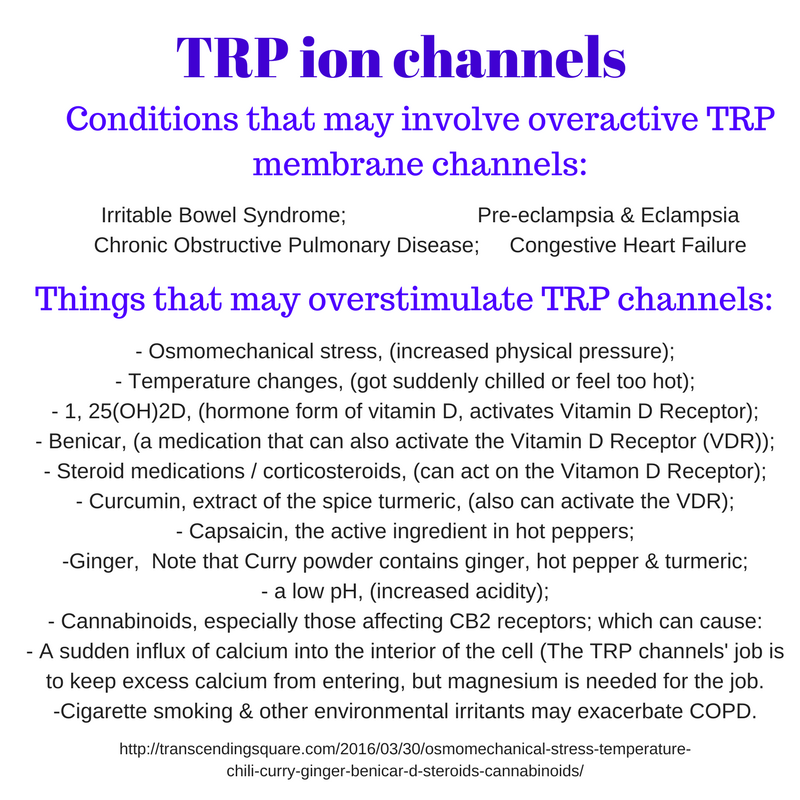 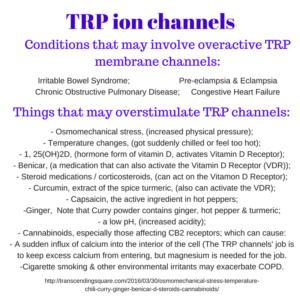