This information about the health benefits and history of the spice currently known as Gumbo File was added/expanded at the end of a recipe  that I was typing up because the notes were hard to read:

but the Gumbo File information became part of the NRF2 promoting diet story (NRF2 links) that I’ve been writing about occasionally since last December.  It may not be clear what my goals are but foremost is my own health and if it helps me than as someone wiht public health experience I know that many others are suffering chronic illness or are trying to help family members. So my sharing my notes helps me keep the information more organized than having it in the original messy handwritten note-book, and online the information may be able to help others with individual health or with health research. Good luck, and DYOR – do your own research or fine a health professional to check on the safety of using the information for your own needs.

The Sassafras Tree is part of the cinnamon/camphor plant family and research has progressed to a patent request for making an anti-cancer extract from the camphor family plants. The preliminary research obtained a little over 8% of the Sassafras Leaves contained the beneficial cinnamon phytonutrient extract they hope to make anti-cancer treatments with.  (including cinnamon, Cinnamomum Kennedy, hairy leaves camphor, linalyl burmannii, sassafras) “” [0056] sassafras aboveground 5kg, pulverized and extracted…to obtain cinnamon plant extracts 412g, a yield of 8.24%” –  https://patents.google.com/patent/CN103520279B/en)

In the diet and menu plan world the whole food is used in larger quantities or more frequently as a preventative support of everyday health – aka baking larger amounts into cookies than might be typically used in a batch gumbo soup. For years I rarely wrote down my recipes but people would ask about my ‘recipe’ and I usually didn’t have one. Once you learn the basic ratios of a type of food or baked good it is easy to create with whatever is available. I started taking notes though while creating so that I could write a recipe that might be able to be repeated by myself or someone else. The create from scratch occasionally isn’t as good as the familiar standard.  My notes are easier to read once typed. 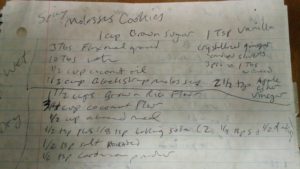 That recipe is typed on a different website on a page about recipe modification, see G84.2: Spicy Molasses Cookies:  https://effectivecare.info/g8-cookies-%26-bean-soup

~~from the recipe post about the Gumbo File and Pomegranate extract variation of the Spicy Molasses Cookies – turns out Sassafras Leaves were a Native American innovation and had been the second most important export from the colonies during the 17th century (tobacco was the largest export crop) – so maybe it is time to harvest more Sassafras Leaves again:

So cookies with an anti-inflammatory benefit – I did feel sleepy this afternoon after making them however and only added this interesting section on the health benefits of Gumbo File after waking up. –

What are the Uses and Health Benefits of Sassafras albidum (Sassafras)?

Herbs at a Glance, Christa Sinadinos, The Northwest School For Botanical Studies http://www.herbaleducation.net/herbs-glance